HungaroControl Hungarian Air Navigation Services celebrated the centenary of Hungarian air traffic control by giving professional awards for the development of Hungarian air navigation services as well as supporting civil organisations.  The reception on the occasion of the centenary was held on 12 February, 2016 in Budapest and was opened by Dr Anita Boros, Deputy State Secretary of the Ministry of National Development responsible for asset management. Following the speech by Mr Kornél Szepessy, CEO of HungaroControl, the HungaroControl Partner Award was given to Mr Hannu Juurakko ATM Director of Frequentis AG; the HungaroControl Best Business Partner Award to Mr Roy Langridge, Director of Mileridge Ltd.; and the HungaroControl Best Customer Award to Mr Gábor Horváth, Country Manager Hungary, Emirates Airline. 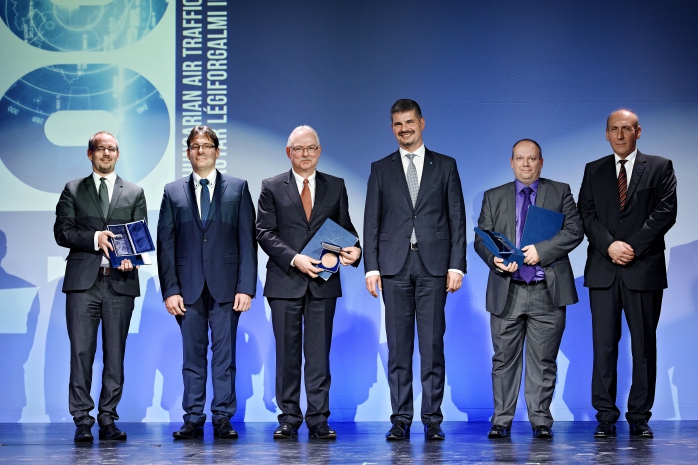 It has been a unique and unrepeatable century, during which Hungarian air traffic control started off with its initial stumbling steps on 31 January 1916 and reached its current world-class service. In the innovation phases all innovations were integrated into the practice of air traffic control, first parallel with radio technology inventions but later the profession also obtained distinctive features, became specialised and independent.

Hungarian air traffic control was established by a handful of radio telegraph operators in 1916 in Temesvár (today Timisoara, Romania). During these one hundred years the work, the supporting technology, the premises and the organisation have changed substantially, but the love for the profession, the commitment, the enormous responsibility and the continuous learning have remained the same.

In the past years, HungaroControl has become one of the leading air navigation service providers. It is a successful state-owned company with a number of innovations and developments both in terms of technology and infrastructure. ”As an air navigation service provider committed to finding innovative solutions in air traffic management, HungaroControl has met international challenges with a series of innovations, development projects, key industrial partnerships and efficiency improvements in order to strengthen its position in the market”, said Dr Anita Boros, Deputy State Secretary of the Ministry of National Development responsible for asset management in her opening speech. ”In 2015, HungaroControl showed remarkable investment performance among state-owned companies, benefitting not only its owner and its partners but also, indirectly, airline passengers and those living in its area of operations”, she added.

Traffic in the Hungarian airspace grew by 11.43% in 2015 – HungaroControl’s air traffic controllers handled more than 730,000 aircraft. 2015 saw new traffic records both in en-route (more than 640,000 aircraft) and in terminal traffic (more than 90,000 arriving and departing aircraft) at Liszt Ferenc International Airport. Growing traffic can be handled safely only with the help of continuous development and new technologies. ”With its innovations, HungaroControl strives to minimise its environmental footprint as well. Thanks to the introduction of Hungarian Free Route Airspace (HUFRA) last year, aircraft can now fly shorter routes, which results in fuel savings and a reduction in CO2 emissions. A year of experience now shows that the model works well, airlines take advantage of its benefits”, emphasised Mr Kornél Szepessy, CEO of HungaroControl in his speech. 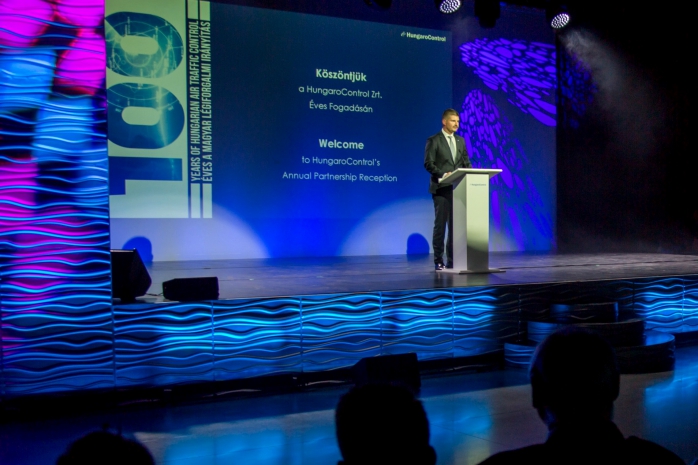 The HungaroControl Partner Award was established 13 years ago. It is awarded to those partners who have significantly contributed to the improvement of HungaroControl’s air navigation services and thus to the building of the company’s reputation.

For years, Frequentis has been one of HungaroControl’s reliable and innovative strategic suppliers. The company’s management supports HungaroControl in maintaining its state-of-the-art technological infrastructure to remain competitive in today’s rapidly changing and challenging environment. The two companies also cooperate in several innovation initiatives (SESAR2020 programme and several Centralised Services consortia). 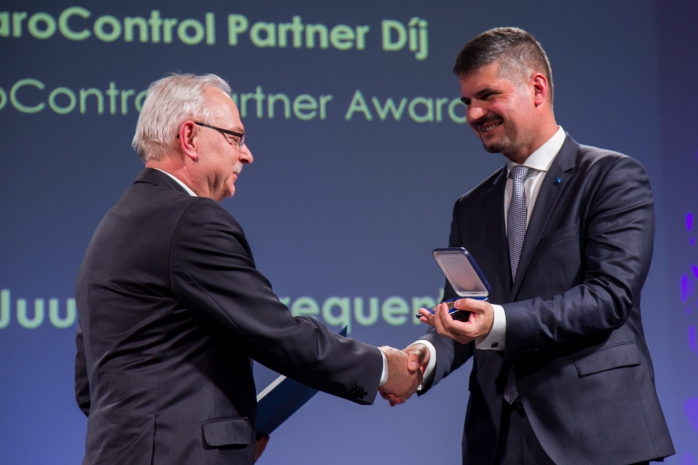 The award was established in 2009 to express HungaroControl’s renewed dynamic business attitude for partners who have greatly contributed to the development of Hungarian air traffic control, service improvement and the enhancement of the company’s reputation.

The award was handed over to Mr Roy Langridge, Director of Mileridge Ltd. by Mr Gyula Hangyál, ATM Director of HungaroControl. 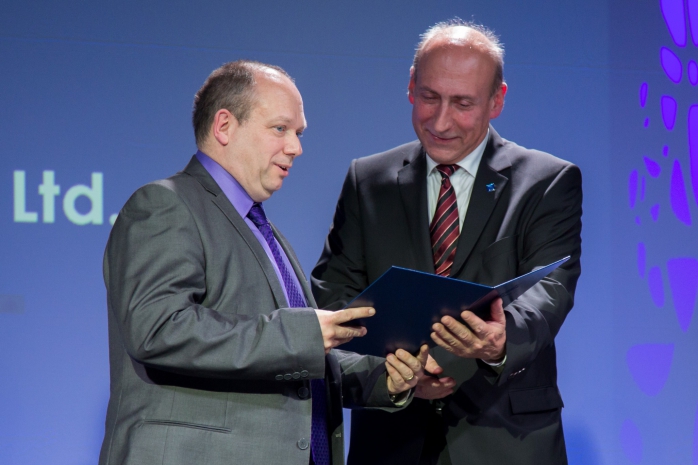 Since 2008, HungaroControl has given the award to airlines, which have greatly contributed to the realisation of HungaroControl’s strategic goals. 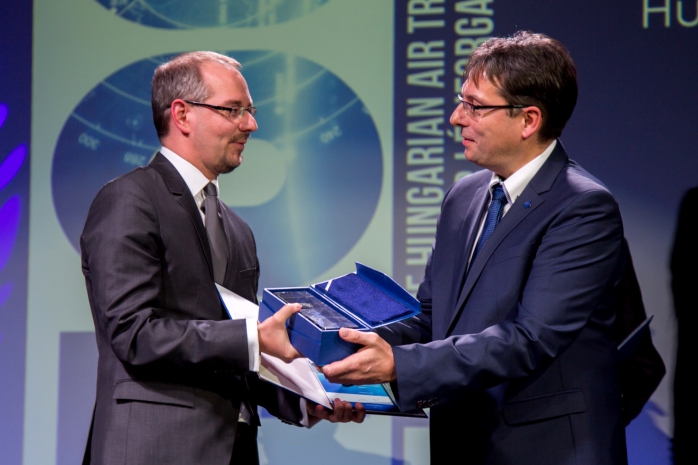 At the reception, HungaroControl handed over financial support to four civil organisations: the Gyöngyvirág 18th District Children’s Home; the Életjel Foundation supporting children with learning disabilities or mental impairment;  the Hortobágyi Madárkórház Foundation and the Jövő Uniója Foundation, which provides disadvantaged children with experiences of a lifetime. 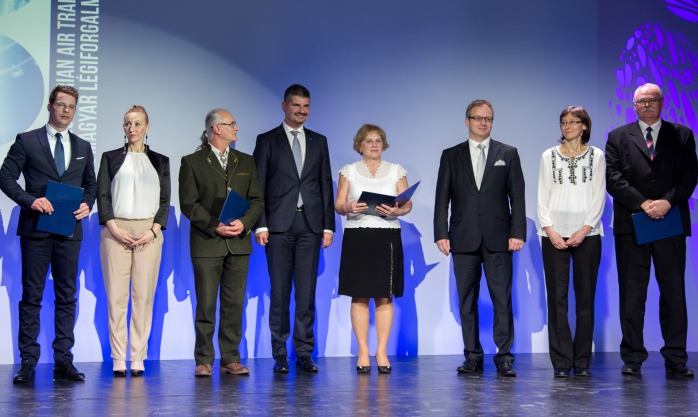