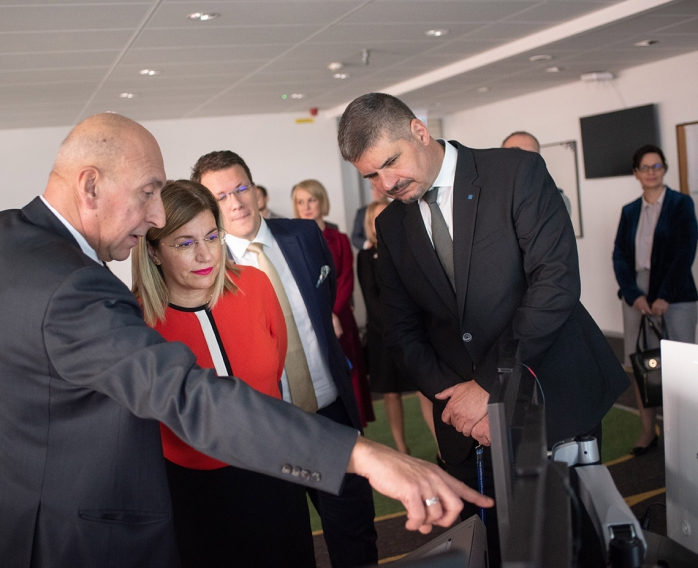 Budapest, March 7, 2019 – HungaroControl remains the only company in Europe that controls the airspace of a non-neighboring country. On behalf of NATO, Hungarian Air Navigation Service Provider controls the upper airspace over Kosovo from April to indefinitely, announced Andrea Bártfai-Mager, Minister Without Portfolio Responsible for the Management of National Assets, and Kornél Szepessy, CEO of HungaroControl.

HungaroControl has been providing service in Kosovo's upper airspace since 2014, 700 kilometers away from the state-of-the-art headquarter in Budapest. In recognition of the outstanding performance of the last five years, the North Atlantic Council has decided to amend the agreement for an indefinite period, so that HungaroControl can continue to provide this service in Kosovo.

"This cooperation is a major success. There is no other country in Europe whose air navigation service provider is managing the airspace of a non-neighboring country," said Andrea Bártfai-Mager, Minister without portfolio. “For HungaroControl 2018 was an outstanding year in performance. More than one million aircraft transported safely with the help of Hungarian air traffic controllers contributing to the growth of the Hungarian economy,”she added.

“Recently there has been a significant increase in Kosovo's upper airspace, the so-called KFOR sector. Almost 116,000 aircraft were controlled in 2018, which is the 30 percent of the total aircraft movement in the last 5 years. During the NATO mandate, in the upper airspace of Kosovo Hungarian air traffic controllers have been responsible for the safety of 394,000 aircraft so far”, emphasized Kornél Szepessy. In 2019 HungaroControl expects a massive increase in traffic. "The number of aircraft movements this January-February is already nearly 7% higher than in same period of 2018, and in the upper airspace above Kosovo we have experienced an average growth of 42.5% over the same period", the CEO said.

According to estimates the reopening of Kosovo's upper airspace for civilian aircrafts’ overflight in 2014 could have reduced the average length of European air routes by 685,000 kilometers per year, which means lower fuel consumption by 24,000 tonnes per year, and 75,000 tons less pollutant emissions into the air. This contributes to one of HungaroControl's main objectives: to reduce the environmental burden of aviation.